There are various types of owls characterized according to their feathers, eyes facial shape and many other physical behaviors. And the following are the different types of owls found in this world.

Its scientific name is Strix nebulosa and it is characterized with a puffy head, a circular facial-disc and yellow eyes. Among types of owls, it is one of the largest owls on earth with extremely longer tail. Their plumage are very fluffy and brown or gray in color. Under the facial disc is a white mustache and feet covered with feathers. It is native to Manitoba, Canada. However, the owl is also found across Canada in Alaska, Minnesota, Asia, Northern Rocky Mountains and northern Europe.

They inhabit forested areas such as spruce and coniferous forests. Mostly, they breed in red fir and conifer in the regions of Sierra Nevada. They feed from hunts made in the late morning and late afternoon in bogs, swamps and in the areas with shrubs and scattered trees. Part of its menu makes the small mammals like voles, chipmunks and mice which they hunt for when they migrate to mountain meadows and estuaries.

They make nest out of sticks that were once used by hawks in the forests and lay 2-5 eggs. During incubation the male bring food. They can live up to 40 years.

It can have various colors ranging from black or grey, white and reddish brown, and its scientific name is Bubo virginianus. With the Great Horned Owl, females are usually larger than males but the facial disc is somewhat orange. Its breasts is characterized by a band of white feathers while its underside and barring are grey and dark grey respectively. A manure Great Horned Owl has a curved upper beak of 1.5” long and also it has a very long neck not the way you can only observe it. It has long talon on its huge and heavy feet.

It lives dense forests, plains and deserts of North, Central and South America. Some can migrate from the northern ranges and move downwards to the southern ranges of North America. It has the tendency of becoming aggressive when threatened. They usually start nesting in the old nests of the hawk or crow in January or February and sometimes in the hallow trees, and lay 2-4 eggs which are incubated by the female and guard the young at any point of attack. It looks for food as from dusk where it hunt the small mammals and insects as prey.

Its scientific name is Asio otus and it is a medium sized owl having yellowish brown and brown plumage. Its body is covered with patches, spots and bars of colors. The Long-Eared Owl adds to the list of types of owls with completely covered legs with feather and a black bill. The females are often darker when compared to males. Due to its feather alignment, it allows noiseless flight hover easily around dense forests.
This type of owl is nocturnal therefore it is very active at dusk. It is found North America, Europe and Asia where hunts small mammals such as kangaroo rats, squirrels, bats, shrews etc.

It joins the category of medium sized types of owls and its scientific name is Tyto alba. It is characterized with gray spots on its head and wings while the underside is white. With females, they usually have more spots when compared to males. The owl is also nocturnal and hunts for small mammals. They use two senses while hunting – sight and hearing to detect accurately their prey, and they do hunt in open grasslands. They are found in all continents except the Antarctica. It inhabits the heaths, moors and woodland. 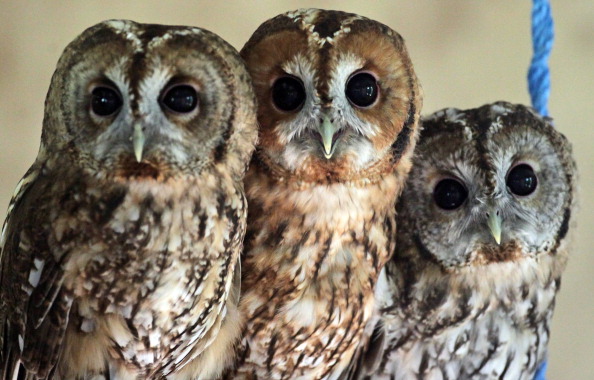